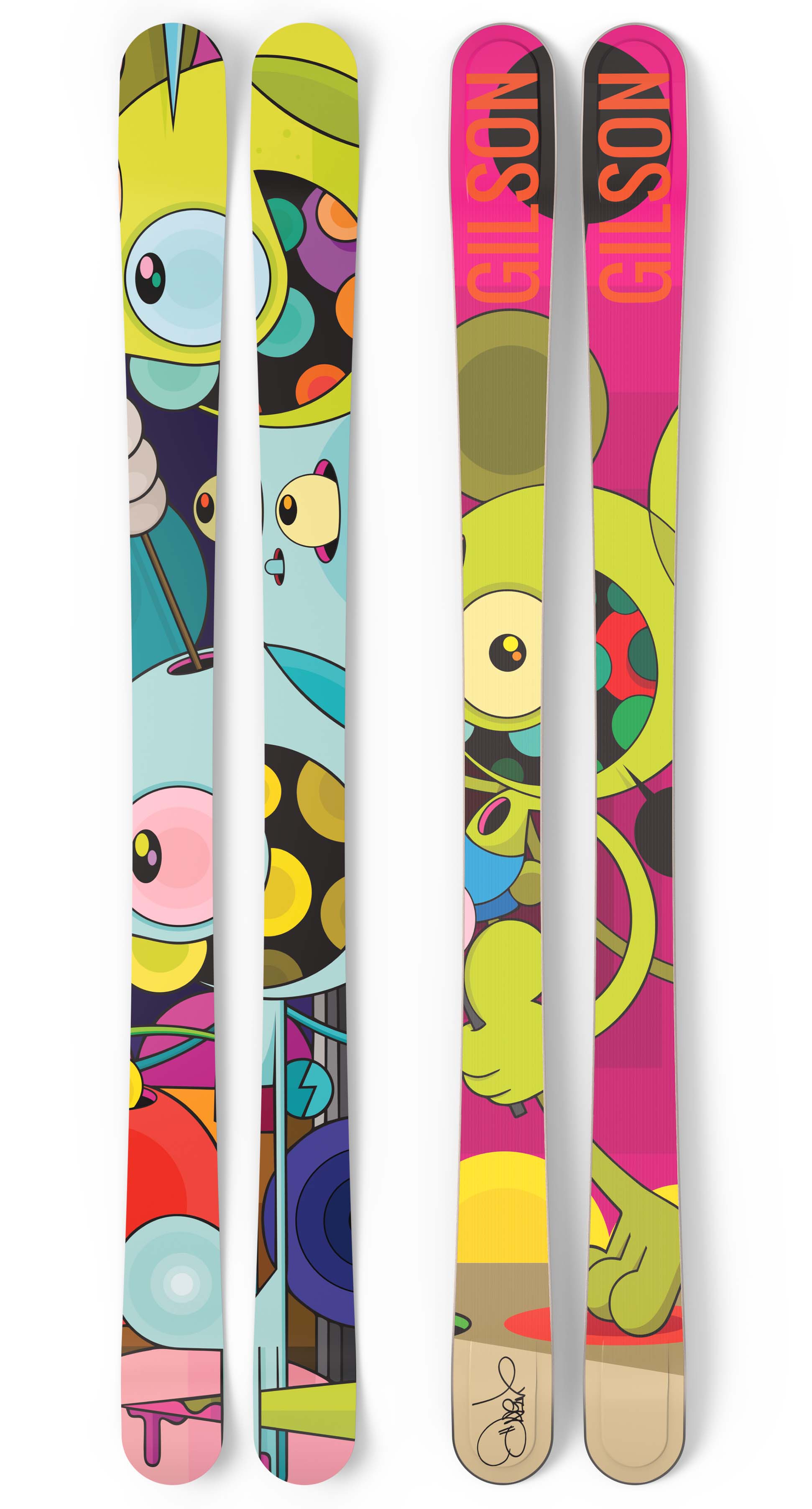 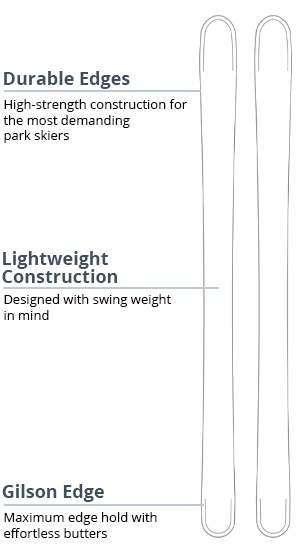 Our high-strength edge is formed from heavy duty steel and adhered with 19 oz triaxial fiberglass under perfectly uniform pressure, reducing blow outs and maximizing the life of the ski.

We know all park skis take a lot of abuse, and the most demanding skiers can go through multiple pairs per season-- we don't like that for you, your wallet or for our planet. Instead of designing a cheaper ski that is bound to be destroyed, we created our park ski to let you do the destroying. With your sweet moves. again and again. For years to come.

Hand Made in America by Gilson to ensure consistent quality and jaw-dropping performance.

First rendered on a wall in Connecticut in 1995, the iconic Space Monkey is not a monkey at all, but a mouse—Dalek's concept of a human being lost in a growing sea of technology and convenience. We're inspired by Dalek's work, and beyond pumped to be releasing this collaboration together.

Built on our award winning Freestyle ski Model, this ski absolutely dominates in the park while turning the entire mountain into your playground. Built to play everywhere, this ski delivers incredibly playful and surfy agility paired with aggressive carving and a snappy response.

Experience a new pair of skis from one of the world's fastest growing ski makers, and see why we've received 4.9 of 5 stars on over 500 Reviews online. Every ski we build is proudly 100% made in the USA.

Winner of the Newschoolers BEST OF TEST award. 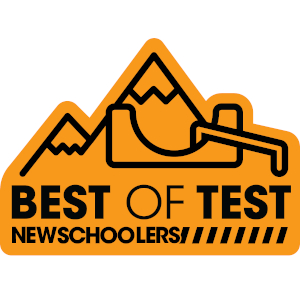 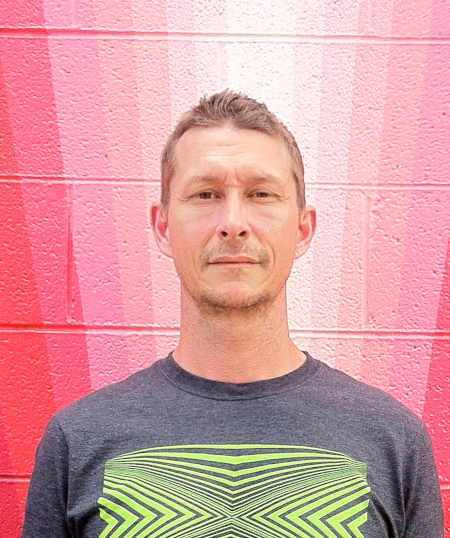 James Marshall, better known as Dalek, is an American painter best known for his Space Monkey character. He is also known for his photography, murals and illustrations.

Marshall was born to a military family in New London, Connecticut and moved around a lot as a kid, finishing high school in Japan then living in Hawaii briefly before returning to the mainland. The artist found his voice and identity in the subcultures of graffiti, punk rock and skateboarding. He earned a BA in Sociology and Anthropology from Virginia Commonwealth University in 1992 and acquired his BFA at the School of the Art Institute in Chicago in 1995.

Dalek’s work is critically acclaimed and has featured in numerous publications, articles and magazines such as The Wall Street Journal, The New York Times, Juxtapoz, and more. He has also participated in numerous solo and group shows throughout the US, Asia and Europe, has painted a number of murals and completed a variety of commercially-commissioned work for companies including Nike, Hurley, American Express, Microsoft, and Instagram. 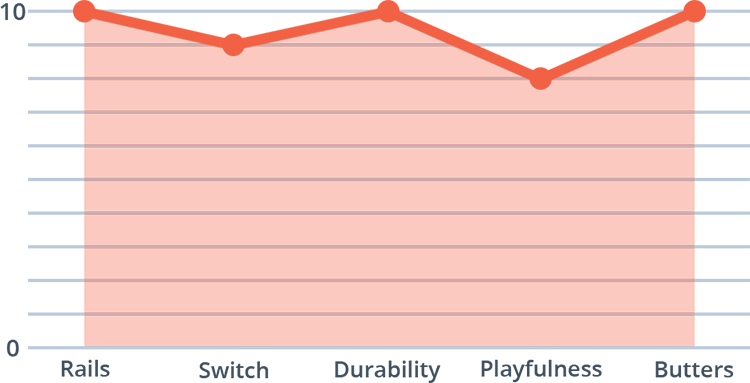 We're here to keep you Flying High and Sliding Smooth. 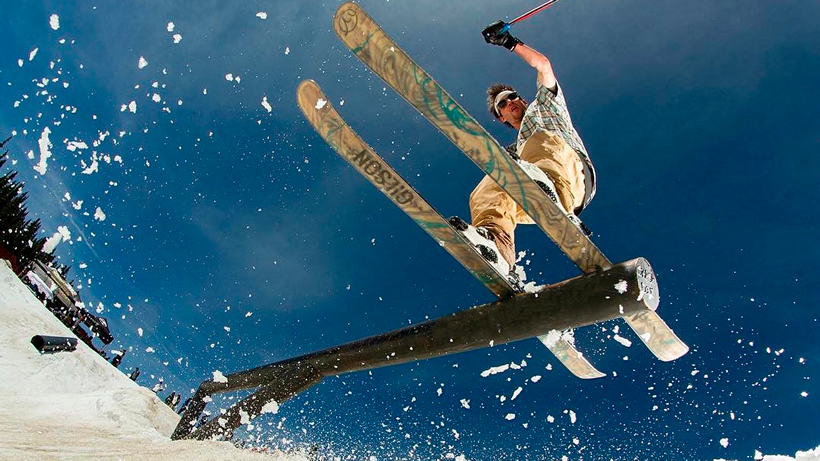 Skis that will take a beating, because we know what you put your equipment through.

Long lasting durability so you never miss a day with your crew.

Still have questions or want to make absolutely sure you have the right model and size? No sweat!

Give us a ring or shoot us a quick email / text and we'd be happy to help.

ps. We don't have a call center. Or an automated answering service. Or a front office clerk. The number above connects you directly with a member of the Gilson team who is currently available to take your call and chat for a few.